2001-2019
The Bikers United Against Child Abuse was Founded in November 2001 but not before we had done the right research into how Bikers could contribute to the safety of children at risk or had been abused..... Our Research took us to America and in particular the BACA a child abuse support organisation that had been in operation for quite a few years and from what we could see had quite a following,
BUACA Founder Pete Geary approached the founder of BUACA “Chief” who after many conversations by email, Pete Geary asked if he could bring BACA to Australia, and understandably their reluctance was due to the infancy of their organisation in America and their wanting to establish themselves nationally before venturing overseas anywhere else. Chief personally approved the strategies used by the BACA to help abused children, and that’s exactly what I did, November 2001....

Below is a copy of the message posted on my website Bikes babes Boats and Beers a msn sponsored site:
Sent: 8/10/2001 5:40 AM
Sent: 8/10/2001 5:40 AM
"As This task of getting word out that such an idea could be reality in Australia I would be interested to hear from Australian Bikers wanting to be part of the launch of this great American Bikers way of helping those that the system won’t, this is the silent abuse that only we can do something about, If you read Inferno's post of him being at a BBQ and witnessing another man slap his kid down as if it was a common practice you would agree that we can make a difference, if you haven’t read the cause of BACA then go to their site and check it out as here it would border on being a vigilante which law enforcement wouldn’t approve , so when i get a lawyer on board we can draft up some guidelines to get started , Just happens I know a lady who is a barrister who may just want to jump on board, plus I may have sum who would sponsor such a group So those that are keen send me a email to: kennesaw@hotkey.net.au
This means you guys in America too as we would be asking BACA to assist in getting BikersUnitedAgainstChildAbuse to a starting point........."

I approached many motorcycle clubs and also businesses to gather support for our new organisation, The name BUACA was invented as It reflected on the need to unite bikers everywhere to the same mission and the same strategies to protect children in Australia, Being United means we can go anywhere in the world to help children and their families on a united front.........

It was in November 2003 when surfing the internet and checking out a website I was a member of the Spleen Vent (OZBIKER.ORG) I joined in on a discussion on how a group of bikers wanted to start a child abuse focusedsupport group organisation , I told the members of the forum that I had already started a similar club here called the BUACA and that we had started in 2001 but due to my illness I have used my time to research and talk about the idea to all the motor cycle clubs I was associated with in Brisbane and other parts of Australia. The momentum in forming the BUACA came from about 5 of us from the website as well as a couple of my friends in my home town who all contributed many hours of their time to get the BUACA off the ground. Our first meet up was in Canberra in August 3 2004 to officiate the Canberra chapter in the Legislative Assembly building, It was a great ride there, but was bloody cold when we arrived. My good old shovel FLH Harley Davidsondidn’t miss a beat(Thanks Robbo ShotGun Motor Cycles who prepped the bike for the trip) After meeting with fellow members and a party back at their clubhouse we left Canberra knowing we had a achieved a recognition for the cause and for our own organisation the original BUACA Australia.
The meeting along with local motorcyclists with politician Jacqui Burke, BUACA's national patron Professor Arthur Veno and a representative of the children's charity Barnardos Australia, Annette Kelly-Eggerton. 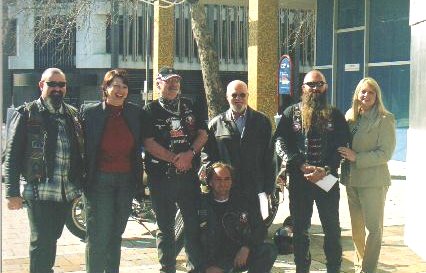 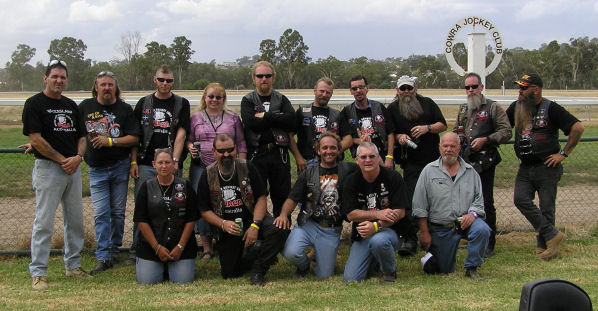 Members from Vic Canberra and Queensland 2005
I